Setting up a React development environment can be confusing and daunting to newcomers. You often heard developers saying different packages like babel, webpack, es6 and etc. are needed (not entirely true) as well. With React getting more popular, there are a fews boilerplate project aim to help developer create a suitable React development environment.

create-react-app is one of the most popular starter template. The aims is to allow developers to create React app with zero build configuration. Developers no longer have to worry about how should webpack be setup, what should be configured with babel to use es6, which linter and test package to use. Everything will just work out of the box. Yes, is so easy!

For developers who needed to touch the underlying configuration, it have a npm run eject that will allow developers to mess with the configuration and do what couldn’t be done previously. Only thing to note is, once eject is run, it cannot be reversed.

The following guide aim to help developers build a Continuous Integration and Continuous Deployment stack for React app. We will be using CircleCI, CodeClimate and Heroku. If you do not have a account at any of the service above, head over to sign up one, is FREE!.

At the end, we would have a React app in Github Repo that will automatically deploy any changes on master branch to Heroku after all tests passes. Here is a sample of the deployed React website. Visual feedback will also provide on pull request like this:

First step is to follows the create-react-app guide to create a new app. Do this:

Then browser should automatically open a page at http://localhost:3000/. If you see a Welcome to React page running, everything is good.

Next, we need to add a little configuration to setup CircleCI for our project. Create a circle.yml in the root directory and add the following:

We have to use node v6 because create-react-app only works with v6 and above. We override the test to run the option with npm test — —coverage to gather coverage report. At the end, we install codeclimate-test-reporter to send the coverage report located at coverage/lcov.info to CodeClimate.

Create a repo in Github and do the following:

This would push the project that we had created into the github.

Build and Test the Project

Head over to CircleCI, sign in and build the newly created project. At the end of the build, you should see a all green like this: 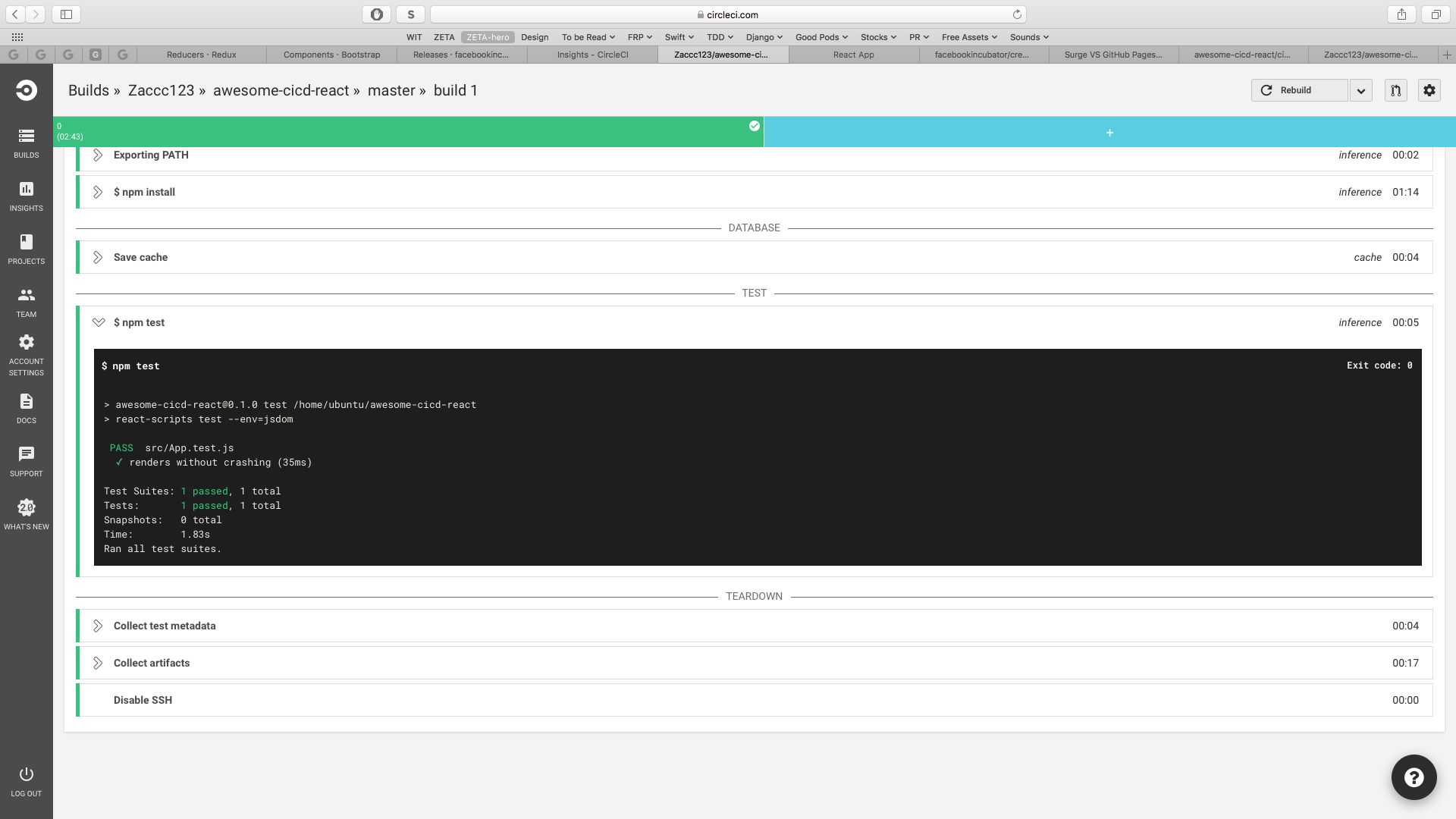 Now, head over to CodeClimate, sign in and build the created github project. We should get this at the end of analyse: 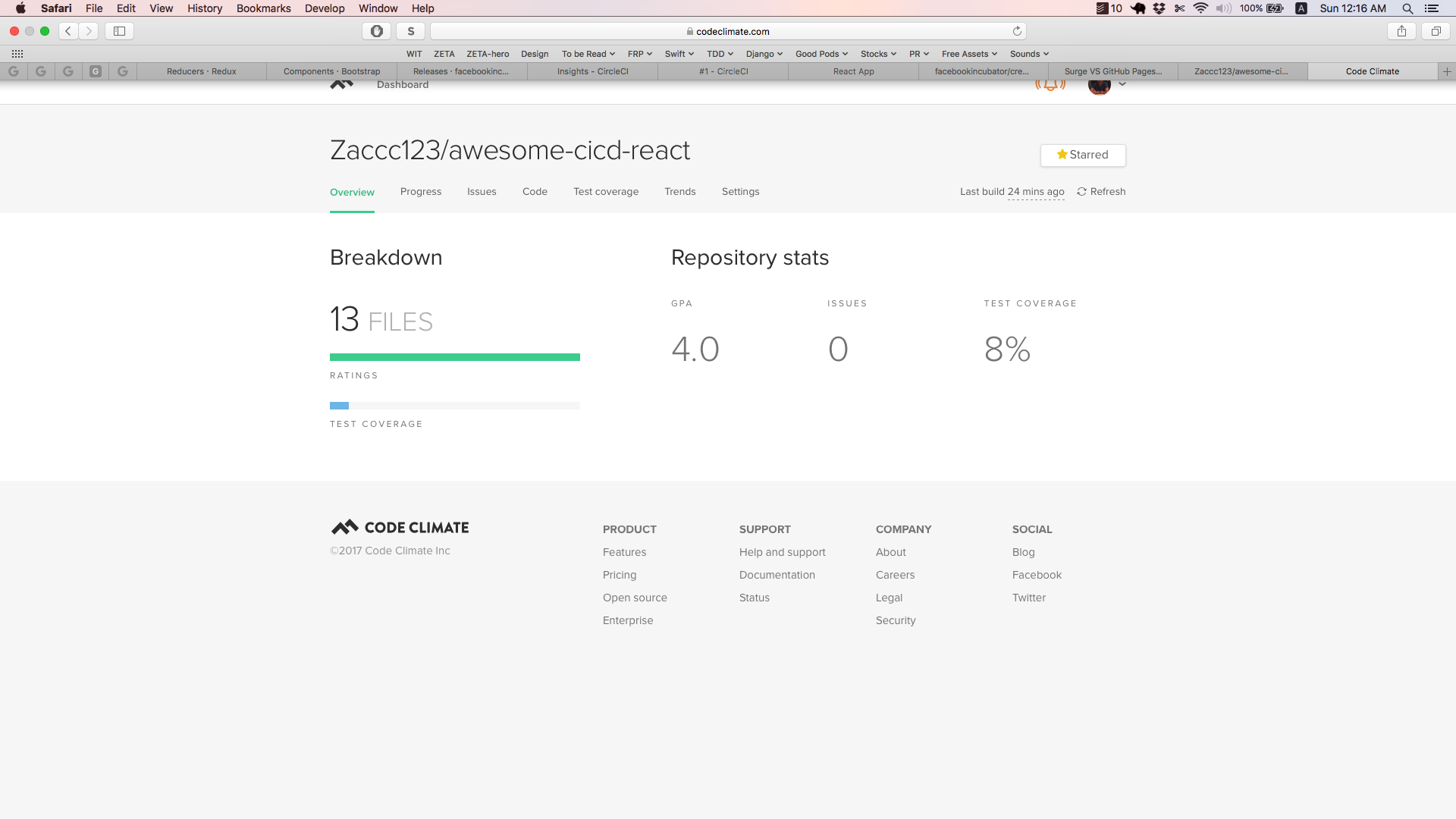 In order to use Test Coverage feedback, we will also need to copy the Test Reporter ID from Settings > Test Coverage and add it into CircleCI environment variable.

In order to deploy React on Heroku , we will use a buildpack. Do the following:

We pushed the latest master branch to heroku with git push heroku master. A webpage will be open at the end showing the Welcome to React page.

Next, we will have to navigate to the newly create app in Heroku Dashboard to setup automated deployment. Do the following on the dashboard:

With a few setup, we have a fully automated continuous integration and deployment suite ready. Now with every commit that is pushed to GitHub, it will send a trigger to CircleCI and CodeClimate. Once the test passed, if it was on the master branch, it will also be automatically deployed to Heroku.

Get my insights on being a product manager with 8 years of former engineering experience. I discuss the problems in product management and how to overcome it in my 2-Pointers Tuesday Newsletter.

Guaranteed no spam and won't be shared with third-parties!

How should product manager say no?

Get my insights on being a product manager with 8 years of former engineering experience. I discuss the problems in product management and how to overcome it in my 2-Pointers Tuesday Newsletter.

All rights reserved • Published with Ghost

Success! Thanks for subscribing to Zac Kwan.

Success! Next, complete membership for full access to Zac Kwan.

Success! Your membership now is active.